Why does teamLab continue to seek a “world without boundaries”?

Launched in 2018, teamLab Planets aimed to blur the boundaries between body and artwork by immersing visitors in massive “Body Immersive” works of art, changing our perception of the boundaries between ourselves and the world. Visitors take off their shoes and socks, then immerse themselves into overwhelmingly massive artwork spaces with others. When living in the city, we tend to perceive ourselves as existing independently, as though there is a boundary between ourselves and the world. But in reality, there are no boundaries: we exist as a part of the world, and the world is a part of us.
- Toshiyuki Inoko

Being Immersed in a Playful Experience the “teamLab Way”

teamLab Planets (hereafter Planets) opened in Toyosu in the summer of 2018. Uno immediately experienced the exhibition and discussed his impressions with Inoko.

UNO: Planets was fantastic. Personally, I think I liked it better than teamLab Borderless (hereafter Borderless) in Odaiba.

UNO: Of course, the two are on different scales and have different purposes to begin with. Borderless is a collection of indoor installation artworks that teamLab has been working on for the past few years, while Planets is smaller and an update of the DMM.PLANETS Art by teamLab (hereafter DMM.PLANETS) exhibition from two years ago. You couldn’t see all of Borderless in half a day, so you’ll have to go two or three times if you want to see the entire thing. But you can see all of Planets in 2-3 hours. But the latter is more playful, isn’t it? Normally, you’d think that Borderless would be a favorite, but I’m reluctant to dismiss the experiential nature of Planets.

INOKO: With Planets, we made each artwork overwhelmingly immersive in order to encourage visitors to rethink their relationship with the world.

UNO: What I felt more with Planets was that I was trying to throw the ball farther with each artwork, not knowing what would happen. So for me, Planets was more exciting.
For instance, there was a message printed at the entrance to Borderless, declaring that it was a “Borderless World” produced by teamLab. But Planets didn’t have anything like that - suddenly, visitors were just in water (Waterfall of Light Particles at the Top of an Incline), or bouncing on cushions (Soft Black Hole - Your Body Becomes a Space that Influences Another Body). It was a power-upped version of DMM.PLANETS from 2016. You let people experience for themselves without first telling them “a whole other world starts here” or “you can let your guard down.” I think this approach is more typical of teamLab.

INOKO: That message, huh… Borderless was such a new concept that we received a barrage of complaints during a preview. People asked things like, “What do you mean there’s no map?!” So we had to include a message and make clear that this concept was different from what we had done previously, because we had received so many complaints.

UNO: So they didn’t understand it was a concept in and of itself. It was normal to get lost and not know where anything was, so you couldn’t even find specific artworks. Borderless was also very good for that reason, but for Planets, I was impressed by the fact that it wasn’t only visually appealing, but tactile too.
I do still think that it’s better to just throw visitors into the water without warning. Or rather, that is the right thing to do with art. Many of the works in Planets appeal to the sense of touch, but I think there is still room for growth in expressions that go beyond just sight and hearing to hack the five senses, including touch or smell, to really heighten the sense of immersion.
And I think that The Infinite Crystal Universe (hereafter Universe) in Planets is one of the most perfect I’ve seen.

UNO: The person who made the work might think, “Well, yeah, of course,” but for me, having seen various versions of Universe in the past, it’s a world away.
I’ve been saying this for a long time now, but the size of the room is really key to Universe. If people think that there’s a wall ahead, it’s impossible to create a work that has the illusion of humans being swallowed up in space. In order to create a sense of immersion in an artwork, you need to prevent people from accurately grasping the space. It’s for that reason that I think Universe needs to be spacious. It’s truly a work where scale guarantees quality, and it’s really perfected by the height of the mirrored ceiling and the size of the site. I think the sense of immersion you want to create is only possible on a scale like that.

Creating an Immersive Experience with Color Hacks and Density Control

UNO: My favorite work was Expanding Three-Dimensional Existence in Transforming Space - Flattening 3 Colors and 9 Blurred Colors, Free Floating. At first glance, it appears to be a type of work in which colorful spheres respond to the visitor, changing the color and sound of the entire space. But we tried a surprisingly wide range of experiments, and it was very exciting.
I particularly enjoyed the moments when the view before me changed into a single, primary color, making the entire space look like a two-dimensional plane.

UNO: To be more specific, it’s interesting to experience the sensation of watching something that looks flat one moment suddenly appear three-dimensional as the color changes.
Yoichi Ochiai says that when we look with our eyes, things in the distance appear two-dimensional or flat. That’s why the word “landscape” exists. Humans don’t feel the three-dimensionality of things that are far away, but by causing that phenomenon to occur up close, I think it paradoxically gives the impression that everything has depth. Even when you suddenly return to a flat surface like that, it’s so incredibly immersive. Perhaps the work is still in development, or rather it could be improved upon, but I think it’s a really good idea.

UNO: It’s like you're killing the human ability to organize visual information, to see distant objects as flat and nearby objects as three-dimensional. This makes the space more immersive in a way that I think is very effective. I didn’t expect you could do so much just by controlling color.
I also really liked the idea of the balls gathering up high or lower down, depending on where you were in the space.

INOKO: That was us controlling the density of the air and changing air pressure to make the spheres move up or down.

UNO: Density has a decisive influence on our perception of the world, but we aren’t usually aware of its existence, and we wouldn’t think to control it to make art.

INOKO: What do you mean by “Density has a decisive influence on our perception of the world”?

UNO: What humans used to distinguish between deserts and forests in the first place was density. We also determine cities and villages by density. In other words, a high density of plants constitutes a forest, and a high density of humans and manmade objects constitutes a city. Humans make distinctions in the world by shades of spatial units.
But we’re not really conscious of that, and density is something that can be controlled. But this artwork has taught me that color and density, which I didn’t think had much to do with immersion, actually play a big role in it. You can understand density if you think about it in theory, but you can’t understand color until you actually experience it. It’s a matter of the structure of the human eye and the processing of visual information by the brain.

The Importance of Lying Down

UNO: In the last artwork, Floating in the Falling Universe of Flowers, you could say it’s just an expression of the world, but it was a relief to have a piece like that. It’s a straightforward visual representation of what we’ve experienced so far. I liked it for the exact same reason that I liked Black Waves, and I thought it was good to have this work at the end as a moderate, self-explanatory piece. It’s a simple trick, but it’s well thought-out. When you stand up, you can’t even walk straight.

UNO: Lying down is simple, but it’s important too. For instance, when you use a computer, you lean forward, and when you watch TV, you lean back. But the premise is that these two postures are different in terms of their active nature. If you think about it that way, it is standard to experience modern art by standing in front of it and focusing your unwavering attention. That means extreme uses of parts of the brain. So there should also be certain mental circuits that are only activated when you’re lying down. I believe there should be more art that appeals to that. It's very simple, but I think that lying down greatly increases the range of possibilities for art.
There were many couples on the day we went to the exhibition together. I thought it was nice that the couples could relax and create a world of their own while flirting with each other, and I think that was made possible because of Planets. I think it’s nice to have art that you can view while relaxing.

INOKO: Well, I try to put them to sleep with Crows are Chased and the Chasing Crows are Destined to be Chased as well, Transcending Space - Floating Nest (hereafter Crows) in Borderless as well.

UNO: But aren’t you more inclined to do that in Planets? In Borderless, everyone is thinking, “Let’s watch something amazing!”

INOKO: They are. In Crows, you feel like you’re moving on a suspension bridge, so lying down is an adventure in and of itself.

INOKO: Yeah, it’s a bit scary - you think you might fall. It’s an adventure.

UNO: For active people, Borderless is a very complete experience, but the appeal of teamLab's exhibitions is that you are opening up a field for people to enjoy art even if they aren't thinking, "Let's go and look at art now!" or aren't quite prepared for the experience. I think it is important that you follow the direction of art that you can enjoy lying down, not art that you have to stand in front of and concentrate on.

UNO: This is a bit strange to say, but by far the easiest thing to write a critique on is Borderless. The message is clear, and it’s a novelty that’s easy to understand. But I think Planets is the truly experimental work that only teamLab can do. Really, I want people to go see Mifuneyama (teamLab: A Forest where Gods Live) as well, but for people who can’t make it out to Mifuneyama, I want them to see Planets and Borderless as a set.
Even so, I really like the fact that you’re doing all three of these different things at the same time. Inoko, you really are a greedy man. 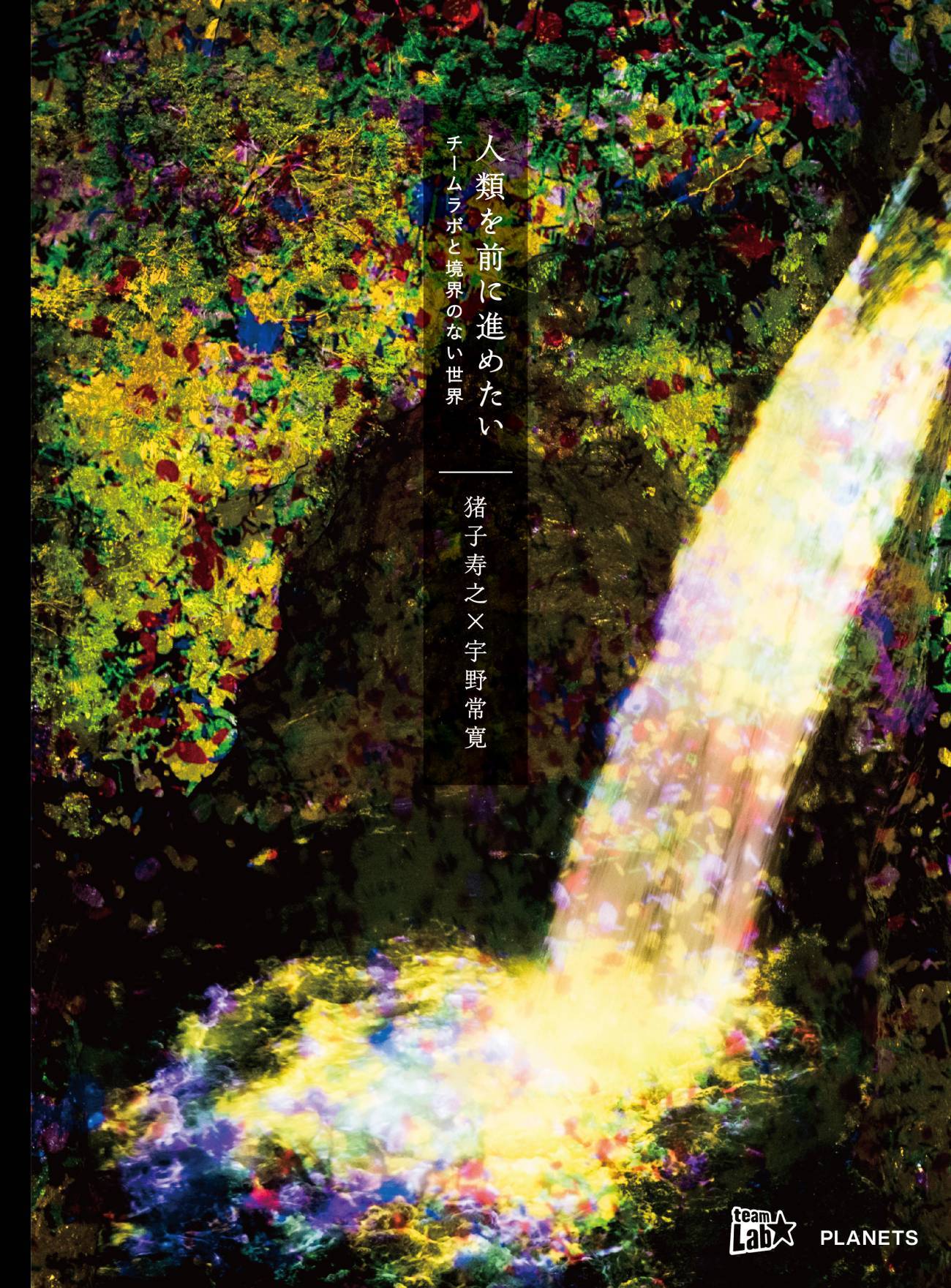